This Saturday is a ‘back to the future’ type moment for the GCTC, with the 2400m Gold Coast Cup added to the $1.4million program.

The PM’s Cup will be run at 1400m this year, but has had a name change to the Australian Turf Club Trophy (Listed) in a partnership that will see a race named the Gold Coast Cup Trophy run at Randwick in August.

GCTC Chief Executive Steve Lines said the club had long wanted to have a “proper” Cup race and he is keen to secure black type status for the 2400m race in the next year.

Saturday’s meeting is shaping up strongly, in particular the Gold Coast Guineas (Group 3), where Chris Waller will have Zousain up against a strong team of locals including Boomsara, Outback Barbie and possibly Zoustyle.

Waller, who has had 48 winners from his Gold Coast satellite stable so far this season, is trying to win the Hollindale for a third time and will have up to six runners, headed by Youngstar and Shillelagh.

Weetwood winner Sexy Eyes runs in the Silk Stocking and the stable will have several runners in the Bracelet, including Word For Word.

The last three years has seen huge change at the Coast, with the club transforming from a deficit to a $1.6million profit last year, crowd numbers up 20 per cent and a mutually beneficial partnership with Aquis.

The same results are anticipated in 2018-19 as the club puts forward its case to become the third metropolitan venue in Queensland.

“We do want to become the third metro track in Queensland,” Lines said.

“Our mantra is, no matter who it is that comes to the races, make everyday people feel special,” Lines said.

“The facilities are good and 50 per cent of our business is food and beverage now. We invest in our community and we try as a club to embrace the wider community of racing people.” 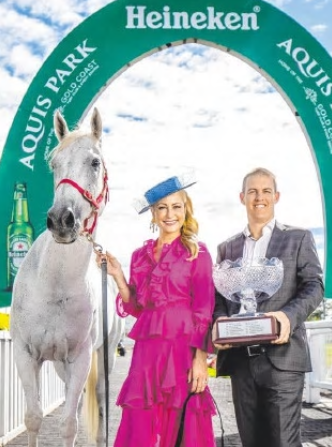 Racing Queensland has committed to work starting on the new training tracks and a re-vamped course proper by spring 2020. Lines said the decade wait had been frustrating, but hadn’t stopped the consistent results of Gold Coast horses.

“We have 450 horses in work and the number of winners that come out of this venue is amazing,” he said.

“We need to upgrade the training facilities, but as it stands, it’s one of the best producing tracks in Australia.”